Sanam Baloch is a Pakistani actress and television host, known for hosting various TV shows such as Diyoo and Sanam Small Room. She is currently hosting morning show on Samaa TV. Previously she hosted morning show on ARY News. As an actress, she has starred in drama series such as Doraha, Band Khirkion Ke Peechey, Noorpur Ki Rani, Ek Thi Marium, Mannchalay, Dastaan and Durr-e-Shehwar. She has also appeared in several music videos. Born on July 14, 1986 in Nawabshah, Pakistan, to Maria Baloch and Altaf Sheikh, she has two brothers, Abbas Baloch and Farhan Baloch. Her step-sister, Sabreen Hisbani, is also an actress. She attended and graduated from Karachi University. She began her career as a talk show anchor in the Sindhi-language television channel KTN. In 2013, Sanam married fellow television host Abdullah Farhatullah. 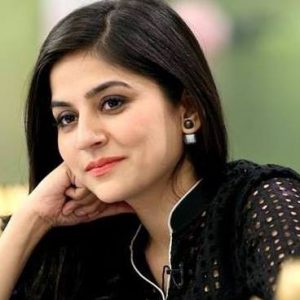 Sanam Baloch Facts:
*She was born on July 14, 1986 in Nawabshah, Pakistan.
*She is a graduate of the Karachi University.
*She left ARY News in 2018.
*Follow her on Facebook and Instagram.