Luka Modric was born on September 9, 1985 in Zadar, Croatia. He is a Croatian professional footballer footballer who plays for Spanish club Real Madrid and captains the Croatia national team. He joined Spanish club Real Madrid in 2012 after spending four seasons in English football club Spurs. Born in Zadar, Croatia, he is the son of Stipe Modrić, an Aeromechanic, and Radojka Modrić, a Textile Worker. He has two younger sisters named Jasmina and Diora. His father joined the Croatian Army during the 1991 war. He has been married to Vanja Bosnic since 2010. They have two children. 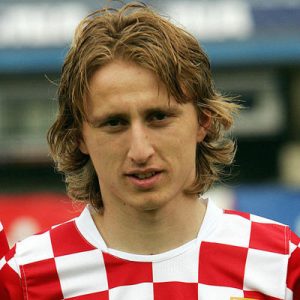 Luka Modric Facts:
*His father joined the Croatian Army during the 1991 war.
*He began his youth career playing for Zadar in 1996.
*He moved to Tottenham Hotspur in 2008 and to Real Madrid in 2012.
*He was a part of the youth team of FC Zadar, before he moved to Dinamo Zagreb in 2002.
*He was named Bosnian Premier League Player of the Year in 2003.
*Follow him on Twitter, Facebook and Instagram.