Luke Benward is an American actor and singer. His first leading role was in the 2006 children’s comedy film How to Eat Fried Worms. In 2008, Benward appeared in the film Minutemen as Charlie Tuttle. He is also known for roles such as Dillon in Ravenswood, Will Cloud in the 2014 film Cloud 9 and Beau Landry on the final season of the Disney Channel series Good Luck Charlie. Born Luke Aaron Benward on May 12, 1995 in Franklin, Tennessee, to parents Kenda Benward, an occasional actress, and Aaron Benward, a country music singer in the duo Blue County, he has two younger sisters, Ella and Gracie. His ancestry includes English, German, and Scots-Irish (Northern Irish). Benward made his acting debut at age 5 in the 2002 film We Were Soldiers. He was once in a relationship with actress Olivia Holt. 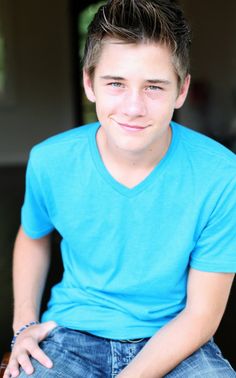 Luke Benward Facts:
*He was born on May 12, 1995 in Franklin, Tennessee, USA.
*His mother was a model and an actress and his father was in a country duo group.
*He has two younger sisters, Ella and Gracie.
*He released his debut studio album, Let Your Love Out in January 2009.
*He is an avid fan of football.
*He is a fan of Michael Buble, Bruno Mars, Eminem, Kings of Leon and Beatles.
*Follow him on Twitter, Myspace and Instagram.