American actress whose career spanned three decades from the 1960s to the 1980s. Lynda was cast as Lisa Casey in the critically acclaimed series Mission: Impossible, garnering a Golden Globe nomination in 1972 and an Emmy Award nomination in 1973. She also appeared as a guest-star in several television series such as The Love Boat and Wonder Woman. Lynda retired from acting in 2002. 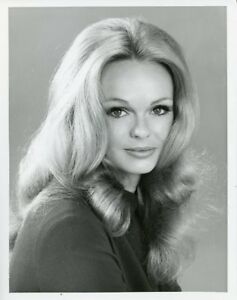 Born Lynda Louise Day on December 11, 1944 in San Marcos, Texas, Lynda began her career with guest roles on many television series of the 1960s, including Route 66, Flipper, Here Come the Brides, The Green Hornet, Mannix, The Fugitive, The Invaders, It Takes a Thief, The Virginian, Good Morning World, and Bonanza. She has been married three times and has two children.

Lynda Day George Facts:
*She was born on December 11, 1944 in San Marcos, Texas, USA.
*She lost a 26-year-old brother to cancer during the 1970s.
*She earned a Primetime Emmy and a Golden Globe nomination for her work on Mission Impossible.
*She credits Peter Graves as her favorite acting mentor/best friend.
*She first met actor Christopher George when they starred together in the 1966 independent film The Gentle Rain. While working together again in the 1970 John Wayne film Chisum, they fell in love and were married on May 15, 1970.