Lyndsy Fonseca is an American actress born in Oakland, California. She is best known by the public for her roles as Colleen Carlton on the CBS daytime soap opera The Young and the Restless, Alexandra “Alex” Udinov on The CW’s hit show Nikita, and Ted’s daughter on How I Met Your Mother. For her role of Dylan Mayfair on Desperate Housewives, she received a Screen Actors Guild Award for Outstanding Performance by an Ensemble nomination. She was cast as Katie Deauxma in Kick-Ass and Kick-Ass 2. Her first television appearance was on the soap opera The Young and the Restless in 2001. Born Lyndsy Marie Fonseca on January 7, 1987 in Oakland, California, USA, to Lima Lynn and James Victor Fonseca, Lyndsy grew up in Alameda and Moraga, California. She is the older half-sister of Hannah Leigh. She has been married to Noah Bean since 2016. She was previously married to Matthew Smiley. 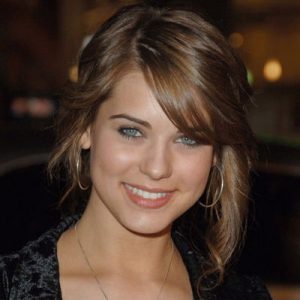 Lyndsy Fonseca Facts:
*She is of Portuguese descent on her father’s side.
*She was discovered by a talent scout in San Francisco.
*She is vegan.
*She was ranked #62 on the 2010 Maxim Hot 100 and #88 on the 2011 list.
*Her favorite actresses are Meryl Streep, Kate Winslet, Cate Blanchett and Natalie Portman.
*Her favorite singers are Sarah McLachlan, Fiona Apple and Dave Matthews.
*She has a tattoo on her right arm of the Hebrew name Hannah.
*Follow her on Twitter, Facebook and Instagram.