MadeinTYO is an American hip hop recording artist. He is best known by the public for his debut single “Uber Everywhere”, which achieved remarkable success, reaching number 51 on the Billboard Hot 100 and number 10 on urban radio. His subsequent songs, “I Want” and “Skateboard P”, were certified gold and platinum by the RIAA. Born Malcolm Jamaal Davis on April 12, 1992 in Honolulu, Hawaii, he grew up traveling in a military family. He was inspired to begin writing music from his cousin. His older brother, 24hrs, is also a rapper. In 2015, he began dating Philadelphia based painter and digital artist, Distortedd (Anhia Santana). Together they have one son, True. 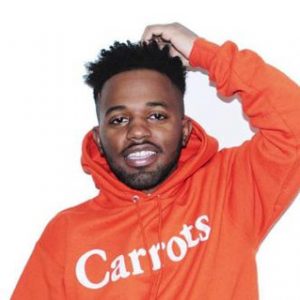 MadeinTYO Facts:
*He was born on April 12, 1992 in Honolulu, Hawaii.
*His real name is Malcolm Jamaal Davis.
*He spent 6 years in Tokyo, Japan.
*He recorded the single “Uber Everywhere” in his kitchen.
*He cites Pharrell, 24hrs, Gucci Mane, and M.I.A. as his biggest influences.
*Currently, he resides in Los Angeles, California, with his fiancée and son.
*Follow him on Twitter, Facebook and Instagram.