Madeline Carroll is an American actress of film and television, best known for her role as Molly Johnson in the 2008 comedy-drama Swing Vote. She is also known for her roles as Cocoa in The Santa Clause 3: The Escape Clause, Juli Baker in Flipped, Annie in Lost, Karen Grant in Scandal, and Ally Macready in Criminal Minds. Born on March 18, 1996 in Los Angeles, California, to a contractor father and a homemaker mother, she has three brothers named Ned, Dylan, and Jack. She began modeling at the age of 3, and was discovered by her theatrical agent ‘Wendy’ in a nail shop in Sherman Oaks when she was 4 years old. 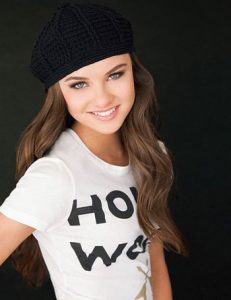 Madeline Carroll Education:
She was homeschooled.

Madeline Carroll Facts:
*She was born on March 18, 1996 in Los Angeles, California.
*Her father is a contractor and her mother is a homemaker.
*At 3, she did her first modeling job for Sears.
*She is a huge fan of Kaiya Eve Couture.
*She has a pet dog named Spot.
*She is very active in giving to foundation “Zoe International” a non-profit Christian organization which rescues children from child prostitution.
*Visit her official website: www.officialmadelinecarroll.com
*Follow her on Twitter and Instagram.