Amy Ryan is an American actress. She is best known for her roles as Helene McCready in the 2007 film Gone Baby Gone, and Beadie Russell on HBO’s The Wire and Holly Flax on NBC’s The Office. She played Adele Brousse in HBO’s In Treatment, and appeared in the 2008 Clint Eastwood-directed film Changeling as Carol Dexter. She earned two Tony Award nominations in 2000 and 2005 for her work in the play Uncle Vanya. Ryan’s other notable works include Win Win (2011), The Naked Truth (1995–1996), I’ll Fly Away (1992), and 100 Centre Street (2001–2002). Born Amy Beth Dziewiontkowski on May 3, 1969 in Queens, New York, USA, to parents Pam Ryan and John Dziewiontkowski, she belongs to English, Irish, and Polish descent. Amy attended New York City’s High School of Performing Arts and Stagedoor Manor Performing Arts Training Center. Her first film role was in Allison Anders’ 1996 film Grace of My Heart. Since August 23, 2011, she has been married to Eric Slovin. Together they have one daughter, Georgia Gracie Slovin. 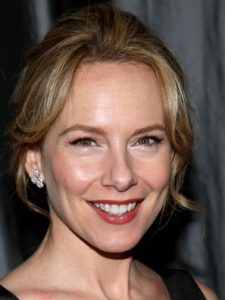 Amy Ryan Facts:
*She was born on May 3, 1969 in New York, USA.
*Her professional surname, “Ryan” is her mother’s maiden name.
*An Academy Award nominee and two-time Tony Award nominee.
*She is best friends with Patricia Clarkson.