Madonna is an American singer, songwriter, and actress who is widely considered the “Queen of Pop”. She has sold over 300 million albums across the world and is the top-selling female artist of all time. She has won seven Grammy awards. Madonna’s hit songs include “Like A Virgin,” “Take a Bow,” “Like a Prayer,” “Hung Up,” “Frozen,” “Secret,” “Music,” “Vogue,” “Papa Don’t Preach,” and “4 Minutes.” As an actress, she made her acting debut in the low-budget feature A Certain Sacrifice in 1979. Her well-known films include Desperately Seeking Susan, Dick Tracy, A League of Their Own, and Evita. For her work in the 1996 film Evita, she received a Golden Globe Award for Best Actress. Born Madonna Louise Veronica Ciccone on August 16, 1958 in Bay City, Michigan, to Silvio and Madonna Louise Ciccone, she is of Italian descent on her father’s side, and of French-Canadian descent on her mother’s side. After graduating from Rochester Adams High School in Rochester, Michigan, she won a scholarship to study modern dance and drama for 3 semesters at the University of Michigan. Madonna moved to New York City in 1978, for a career in modern dance. After performing as a member of the pop musical groups Breakfast Club and Emmy, she released her self-titled debut album, Madonna in 1983, by Sire Records. She was married to Sean Penn from 1985 to 1989 and Guy Ritchie from 2000 to 2008. 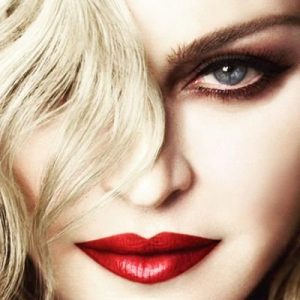 Madonna Facts:
*Born on August 16, 1958 in Bay City, Michigan, she was raised as Roman Catholic.
*She was a high school cheerleader.
*She is the fourth-best-selling music artist worldwide (300 million).
*Her “Sticky & Sweet Tour” is the seventh-highest-grossing concert tour of all time ($408,000,000).
*People Magazine named her one of the top 50 Most Beautiful People in the World in 1991, and ’25 Most Intriguing People of 2001′.
*She ranked #8 on VH1’s 100 Greatest Women of Rock N Roll, and ranked #6 in Life’s 100 Greatest Rockers List in March 2002.
*In Jan 2000, she was placed at #35 in the list of “100 sexiest women” of the 20th Century by Playboy.
*Forbes magazine named her world’s wealthiest female musician in January 2008.
*She is a fan of Betty Grable, Carole Lombard and Katharine Hepburn.
*She is a huge fan of Dannii Minogue and Kylie Minogue.
*Her favorite Designers are Dolce & Gabbana, Jean-Paul Gaultier, Betsey Johnson, Gianni Versace, Stella McCartney and Maripol.
*She is good friends with Herb Ritts, Jean-Baptiste Mondino, Mary Lambert and David Fincher.
*Visit her official website: www.madonna.com
*Follow her on Twitter, Google+, SoundCloud, YouTube, Tumblr, Facebook and Instagram.