Jodi Santamaria is a Filipina actress. She is best known for the television work on series such as Maalaala Mo Kaya and Tayong Dalawa. She played Maya dela Rosa in the Philippine daytime television serial Be Careful With My Heart, for which she won two consecutive GMMSF Box-Office Entertainment Awards. She has also played prominent roles in the films Bagong Buwan, All You Need Is Pag-Ibig, You Are the One, The Achy Breaky Hearts, and My Amnesia Girl. Born Jodi Chrissie Garcia Santamaria on June 16, 1982 in Santa Rosa, Philippines, she is the youngest of two children. Sta. Maria and her brother was raised by their single mother. She graduated from high school in at the Southville International School and Colleges. She began her showbiz career as a member of the Star Magic Batch 7 and appeared in her first television series, Tabing Ilog, when she was seventeen years old. She married Panfilo “Pampi” Lacson Jr. the son of Philippine senator Panfilo Lacson in 2005, and the couple had a son named Panfilo Lacson III in 2005 before getting divorced in 2011. 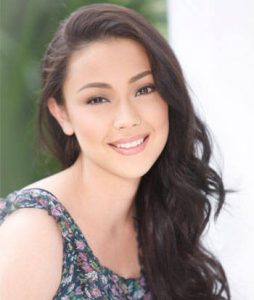 Jodi Santamaria Facts:
*She was born on June 16, 1982 in Santa Rosa, Philippines.
*A member of the ABS-CBN’s Star Magic talent group.
*Sta. Maria is considered to be one of the Philippine’s most talented actresses of her generation.
*She met her future husband Pampi Lacson while at the set of Tabing ilog (2000).
*She was romantically linked to actor, Baron Geisler.
*Visit her official website: www.jodistamaria.ph
*Follow her on Twitter, Facebook and Instagram.