Magdalena Wrobel is a Polish model. She is best known as the former spokesmodel for Wonderbra’s Three Degrees of Wonder. She is also known as a Victoria’s Secret model. She has appeared on the cover of fashion magazines such as Marie Claire, Glamour, Cosmopolitan, Woman, and Maxim. She has also advertised for many brands such as Anne Klein, Donna Karan, Emporio Armani, Lord & Taylor, Wonderbra, Worth and Zoran. Born on December 13, 1975 in Sopot, Poland, Magdalena entered modeling when she was fifteen years old after being discovered by a photographer. When she was 18 years old, she entered the 1993 Ford Supermodel of the World contest and placed in second. 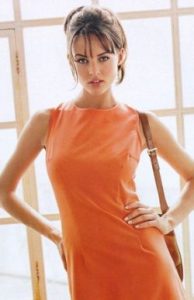 Magdalena Wrobel Facts:
*She got into modeling when she was 15 years old after being discovered by a photographer.
*She was ranked #47 on the Maxim Hot List in 2001.
*She was the first Polish model of ‘Victoria’s Secret’.
*Her hobbies include reading, watching movies and doing yoga.
*Her favorite food is Sushi.
*She ended her career in modeling in 2008.