Jenna Dewan is an American actress, former model, businesswoman and dancer. She is best known for her role as Nora Clark in the 2006 romantic dance film, Step Up, in which she played an accomplished dancer. Her television credits include Supergirl (2015–2016), Witches of East End (2013–2014), American Horror Story (2012–2013), and The Playboy Club (2011). She has also appeared in several music videos for artists such as Justin Timberlake, Missy Elliott and Mandy Moore. She also appeared in Christina Aguilera’s 2010 music video “Not Myself Tonight.” Born Jenna Lee Dewan on December 3, 1980 in Hartford, Connecticut, USA to Darryll Dewan and Nancy Lee Bursch, she grew up in Grapevine, Texas. She is of Lebanese and Polish descent on her father’s side, and of German and English descent on her mother’s side. After graduating from Grapevine High School in Grapevine, Texas, she attended the University of Southern California. She was discovered by a dance agent and toured alongside some of the greatest in music entertainment, most notably Janet Jackson and Ricky Martin. She has been married to Channing Tatum since July 2009. They have a daughter, Everly Tatum. 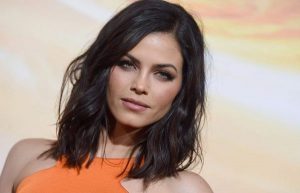 Jenna Dewan Facts:
*Her parents got divorced when she was young and her mother remarried Claude Smith.
*She is a vegan.
*She is an animal rights activist.
*She has a dog named Meeka.
*She was a cheerleader during her high school.
*Visit her official website: www.jennadewanunwrapped.com
*Follow her on Twitter, YouTube, Facebook and Instagram.