Maggie Civantos is a Spanish actress. She is best known for her portrayal of Macarena Ferreiro in the Antena 3 woman’s prison series Vis a Vis (Locked Up), for which she won a 2015 Premios Ondas, Premios Madrid Imagen (MIM Series) 2015 and Premios XXIV Union de Actores 2016. From 2012 to 2013, Civantos portrayed Angélica in the Canal Sur Televisión TV series Arrayán, and starred as Ángeles Vidal in the Netflix series Las Chicas Del Cable in 2017. In 2019, she began appearing in the RTVE series Malaka. Born on December 28, 1984 in Málaga, Spain, her father is a sound technician and her mother is a singer. She was named after the character Maggie Gioberti in the TV series Falcon Crest. She made her television debut playing the role of Marta in the series Eva y kolegas in 2008. 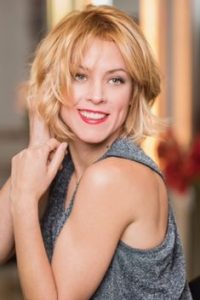 Maggie Civantos Facts:
*She was born on December 28, 1984 in Málaga, Spain.
*She attended Superior School of Dramatic Art of Malaga.
*She began her career appearing in Escenas de matrimonio, Hospital central and Yo soy Bea.
*From 2015 to 2019, she starred as Macarena Ferreiro in the Antena 3 woman’s prison series Vis a Vis alongside Najwa Nimri, Carlos Hipólito, Roberto Enríquez, Berta Vázquez, and Alba Flores.
*In 2017, she appeared as Ángeles Vidal in the Netflix series Las Chicas Del Cable alongside Blanca Suárez, Nadia de Santiago and Ana Fernández García.
*She has a pet dog named Tito.
*She enjoys traveling
*Follow her on Twitter and Instagram.