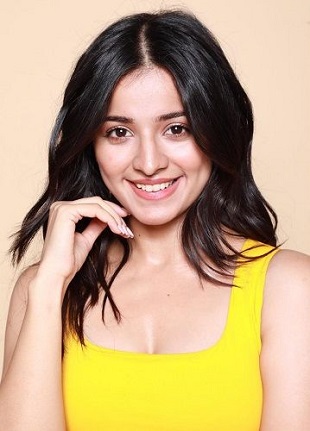 Mahima Makwana is an Indian actress, active primarily in Hindi and Telugu films. She came to prominence and became a household name through her character Rachna in Zee TV’s popular soap opera Sapne Suhane Ladakpan Ke.

Born on August 5, 1999 in Mumbai, India, her father was a construction worker who died when she was five months old. Makwana and her elder brother were raised by their mother, a former social worker. She did her schooling from Mary Immaculate Girls’ High School and has a bachelor’s degree in mass media.

Mahima Makwana Facts:
*She was born on August 5, 1999 in Mumbai, India.
*She entered television with Miley Jab Hum Tum and Balika Vadhu as a child artist.
*She made her film debut with the 2017 Telugu film Venkatapuram.
*She made her Bollywood debut with the 2021 action thriller film Antim starring Salman Khan and Aayush Sharma.
*Follow her on Twitter and TikTok.