Maite Perroni is a Mexican actress, singer and model. She is best known for her performances in such telenovelas as Rebelde, Cachito de cielo, Cuidado con el ángel, Mi Pecado Triunfo del Amor, La Gata, Antes muerta que Lichita and Papá a toda madre. Perroni gained international recognition as a member of the Latin Grammy-nominated pop group RBD. She released her debut album Eclipse de Luna on August 27, 2013, through Warner Music. It charted at #2 in the U.S. Billboard Latin Pop Albums. Among her awards, she has won seven acting awards including ‘Best Actress” and three music awards including “Best Female Artist”. Born Maite Perroni Beorlegui on March 9, 1983 in Mexico City, Mexico, to parents Maite Beorlegui and Javier Perroni, she lived in Guadalajara, Mexico for twelve years. She has two younger brothers named Adolfo and Francisco. From 1999 to 2000, Perroni studed acting at Televisa’s Centro de Educación Artistica (CEA). She has been in a relationship with Chilean musician and producer Koko Stambuk since 2013. Previously, she dated Guido Laris, Carlos de la Mota, and Mané De La Parra. 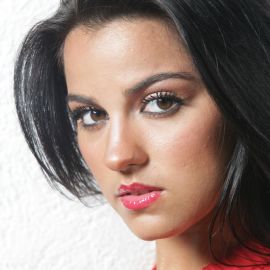 Maite Perroni Facts:
*She was born on March 9, 1983 in Mexico City, Mexico.
*Growing up, she appeared in many TV commercials and in some music videos.
*She was a member of the Mexican band RBD.
*She has been chosen as one of the “50 Most Beautiful People en Español” for eight consecutive years.
*She speaks Spanish and English fluently.
*She is a longtime time Brand Ambassador for Proactiv for the U.S. Hispanic Market.
*She enjoys roller skating.
*She has a Bulldog named “Sancho”.
*Visit her official website: www.maiteperroni.world
*Follow her on Twitter, YouTube, Facebook and Instagram.