Rob Mariano is an American television personality, best known for competing on the reality television competition series Survivor. Widely considered to be one of the greatest Survivor players of all time, Mariano has appeared on Survivor: Marquesas, Survivor: All-Stars (runner-up), Survivor: Heroes vs. Villains, Survivor: Redemption Island (winner), Survivor: Island of the Idols (mentor), and Survivor: Winners at War. He has also appeared on The Amazing Race; The Amazing Race 7 (runner-up) and The Amazing Race 11: All-Stars. Born Robert Carlo Mariano on December 25, 1975 in Boston, Massachusetts, he grew up in Canton, Massachusetts. His parents are both of Italian descent. In 1994, Mariano graduated from Xaverian Brothers High School, where he played golf and hockey. In 2005, he married Survivor co-star, Amber Mariano. Together they have four daughters. 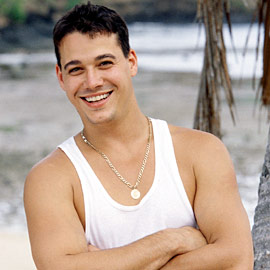 Rob Mariano Facts:
*He was born on December 25, 1975 in Boston, Massachusetts, USA.
*He is of Italian descent.
*He played golf and hockey at Xaverian Brothers High School.
*He won Survivor: Redemption Island.
*He is a big fan of Boston Red Sox, Boston Bruins, and New England Patriots.
*Visit his official website: www.bostonrob.com
*Follow him on Twitter and Instagram.