Mandy Moore is an American pop singer-songwriter and actress, known for hits like “I Wanna Be with You,” “In My Pocket” and “Candy”. Moore first came to prominence with her 1999 debut single, “Candy”, which peaked at number 41 on the Billboard Hot 100. It also topped the Australian Charts at number 1. Her debut album, So Real, went platinum and her second album, I Wanna Be with You, received gold certification. Aside from her success in music, she has also great acting career. From 2016-2022, Moore starred as Rebecca Pearson in the NBC family drama series This Is Us. She provided the voice of Rapunzel in the 2010 animated film Tangled. Born Amanda Leigh Moore on April 10, 1984 in Nashua, New Hampshire, to Stacy and Donald Moore, she was raised in Longwood, Florida. She has an older brother, Scott and a younger brother, Kyle. She was married to alternative country musician Ryan Adams from 2009 to 2016. In 2015, she began dating musician Taylor Goldsmith. They announced their engagement in September 2017, and were married in Los Angeles on November 18, 2018. In February 2021, Moore gave birth to the couple’s first child, a boy. 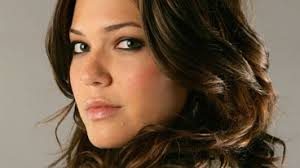 Mandy Moore Facts:
*She was born on 10 April 1984 in Nashua, New Hampshire.
*Her father, Donald Don Moore, was a pilot for American Airlines and her mother Stacy was a former news reporter.
*She moved to Florida when she was only two months old.
*She is the middle of the three children.
*She wanted to become a news reporter.
*People Magazine named her one of the top 50 Most Beautiful People in the World in 2002.
*In 2002, she was ranked #67 in Stuff magazine’s “102 Sexiest Women In The World”.
*She ranked #48 in 2007 and #75 in 2008 in Maxim magazine’s Hot 100 women in the World editions.
*She cites singers and artists such as Alanis Morissette, Blondie, Carole King, Debbie Gibson, Janet Jackson, Mariah Carey, Madonna, Shania Twain, Tiffany, and Joni Mitchell as big influences.
*She is good friends with singer Josh Groban and Kellan Rhude.
*She has three cats named Cloe, Zoe, and Milo.
*Follow her on Twitter, Facebook and Instagram.