Marah Japier is a Syrian actress of television and film. She is known for the television work on series Bab El Hara, Khawatem, Haa’irat, Zemen el Barghout, Wantd Men, Syrian, and Fares wa Khams Awanes. Born Marah Mahmoud Gabr on May 30, 1968 in Damascus, Syria, she is the daughter of actor Mahmoud Jaber and actress Haifa Wassef. Her sister is an actress Laila Jabr, and her niece is actress Dana Gabr. Marah attended Lebanese University. She is married to Osman Juha. 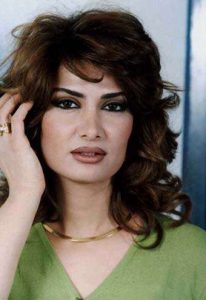 Marah Japier Facts:
*She was born on May 30, 1968 in Damascus, Syria.
*She came from a Druze family of actors and actresses that includes Mahmoud (father), Haifa (actress), Naji Jaber (uncle), Laila Jabr (sister) and Dana Jaber (niece).
*Her father, Mahmoud Jaber, is considered to be one of the founders of the Syrian art association and the Syrian theater.
*She played the role of a resistance fighter in the Algerian revolution in the TV series Tamer Henna (Henna Blossoms).