Marco Rubio is an American politician who is the junior United States Senator from Florida. He served as Speaker of the Florida House of Representatives from January 2, 2007 to January 2, 2009. Rubio was born as Marco Antonio Rubio on May 28, 1971 in Miami, Florida, USA to Cubans parents. He is the second son of Mario Rubio Reina and Oriales Rubio. He married Jeanette Dousdebes in October 1998. Together they have four children: Amanda, Daniella, Anthony and Dominic Rubio. 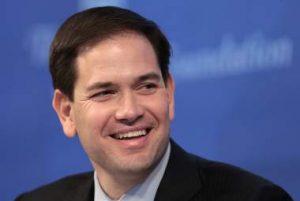 “I believe Jesus Christ is God. I believe He loves every single human being that has ever lived, no matter what they have done, even if they don’t believe in Him.” – Marco Rubio