Marcus Dobre is an American social media personality who collaborates with his twin brother Lucas on the YouTube channel Lucas and Marcus, where they’ve earned over 21 million subscribers and growing. Their Twinbotz account amassed more than 1 million followers. Born Marcus Dobre-Mofid on January 28, 1999 in Gaithersburg, Maryland, to retired Olympic gymnast Aurelia Dobre and Boz Mofid, he is of Middle Eastern descent on his father’s side, and of Romanian descent on his mother’s side. Marcus has other two older brothers, Cyrus (born 1993) and Darius (born 1995). 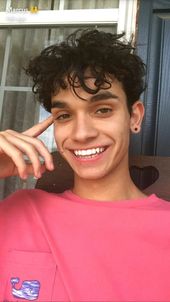 Marcus Dobre Facts:
*He was born on January 28, 1999 in Gaithersburg, Maryland, USA.
*His parents are World Champion gymnast Aurelia Dobre and Boz Mofid.
*He and Lucas first gained fame on the 6-second video app Vine.
*He enjoys spending time with his family.
*He has a matching tattoo with his twin brother Lucas.
*Follow him on Twitter, Facebook, YouTube and Instagram.