Mardy Fish is a former American professional tennis player who achieved his career’s best ranking on August 15, 2011, which was #7. He turned professional in 2000, and retired in 2015. He won six ATP Titles in career and lost 14 Finals. He reached the quarterfinals of the 2007 Australian Open, the 2008 US Open, and the 2011 Wimbledon Championships. Born Mardy Simpson Fish on December 9, 1981 in Edina, Minnesota, he is the son of Tom and Sally Fish. He has a sister Meredith Fish. He married Stacey Gardner, on 28 September 2008 and they have two children: son Beckett Gardner Fish and daughter Stella Fish. 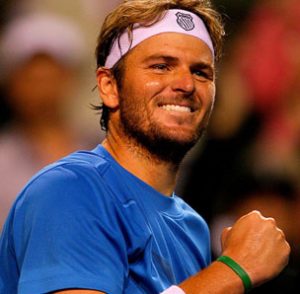 Mardy Fish Facts:
*He started hitting tennis balls at the age of two.
*He was a hardcourt specialist.
*He turned professional in 2000.
*He is a big fan of the Minnesota Vikings.
*He is a supporter of English football club Everton.
*He is good friends with Andy Roddick and Bob and Mike Bryan.
*Follow him on Twitter.