The 42nd President of the United States Bill Clinton was born William Jefferson Blythe III on August 19, 1946 in Hope, Arkansas, the son of Virginia Dell and William Jefferson Blythe, Jr., a traveling salesman. His father died in a car crash three months before Bill was born. He was raised by his grandparents for four years while his mother was in Louisiana studying nursing, in order to support herself and her son. His siblings are Roger Clinton, Henry Leon Ritzenthaler and Sharon Lee Blythe. He has been married to Hillary Clinton since 1975. They have a daughter, Chelsea Clinton. 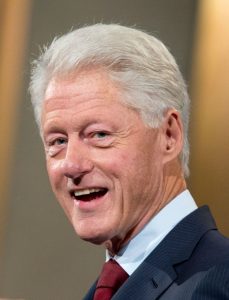 Bill Clinton Facts:
*He is fluent in German.
*Secret Service codename was Eagle.
*Huge fan of Elvis Presley.
*His allergies include chocolate, dairy products, and flour.
*First president from the “Baby Boom” generation.
*His favorite films are High Noon (1952) and The Princess Bride (1987).
*The first U.S. President to be born after World War II.
*He was named Time magazine’s “Man of the Year 1992”.
*Admitted to having an affair with Monica Lewinsky.
*Follow him on Twitter.