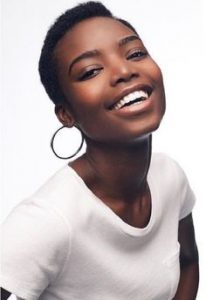 Maria Borges Facts:
*She was born on October 28, 1992 in Luanda, Angola.
*She lost her mother at the age of 11.
*She was the runner up in a 2010 modeling contest.
*She signed with Supreme Agency in 2012.
*She was named Forbes Africa Magazine’s top model of 2013.
*The first African woman to feature on the cover of the American version of ELLE, 20 years after Sudanese model Alek Wek in 1997.
*She is a Riccardo Tisci favorite and calls him her “godfather”.
*She has a tattoo on her forearm of the words “Step by Step.”
*Visit her official website: www.iammariaborges.com
*Follow her on Twitter, Facebook and Instagram.