Maria De Filippi is a multiple award winning Italian television host and owner of the television production company, Fascino PGT. She is known for her televised talent shows ‘Amici di Maria De Filippi’ and ‘Tu Si Que Vales’, and her two talk shows ‘Uomini & Donne’ and ‘C’è Posta Per Te’. In 2001 she hosted Telegatto with Gerry Scotti. She has been one of Italia’s Got Talent’s judges and producers since 2009. Born on December 5, 1961 in Milan, Lombardy, Italy, she moved to Pavia when she was ten years old. In 1995, she married talk show host Maurizio Costanzo with whom she has an adopted son. 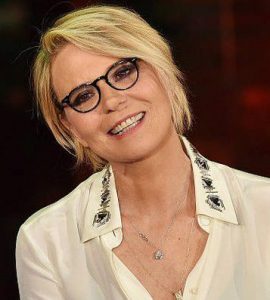 Maria De Filippi Facts:
*She was born on December 5, 1961 in Milan, Lombardy, Italy.
*Her family moved to Pavia when she was ten years old.
*One of the most popular Italian presenter in Italian television.
*She has been married to Maurizio Costanzo since 1995. They have an adopted son.