Maria Kanellis is an American professional wrestler, professional wrestling manager, actress, model and singer, best known for her time with World Wrestling Entertainment (WWE) from 2004 to 2010. Kanellis posed for the April 2008 cover and pictorial in Playboy magazine, which WWE incorporated into one of the year’s most popular story-lines on Monday Night Raw. She was also a contestant on NBC’s hit series “The Celebrity Apprentice” in March 2010. 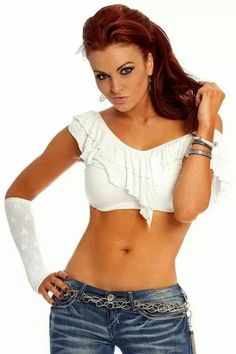 Born Maria Louise Kanellis on February 25, 1982 in Ottawa, Illinois, she is of Greek descent. She has two younger siblings, a sister named Janny, and a brother, Bill. Kanellis graduated from Ottawa Township High School in 2000, and then went on to study at Northern Illinois University. She is married to wrestler Mike Bennett with whom she has a daughter named Freddie Moon.

Maria Kanellis Facts:
*She was born on February 25, 1982 in Ottawa, Illinois, USA.
*She played basketball, volleyball, and softball in high school.
*She started modeling when she was 15 and later became a Hawaiin Tropic Girl.
*She began her career as a contestant on the reality show Outback Jack in 2004.
*She placed fifth in the Diva Search in 2004, and was later hired by WWE as a backstage interviewer.
*She began competing in the ring as a professional wrestler in 2005 and received the Slammy Award for Diva of the Year in 2009.
*She released her debut album Sevin Sins on April 13, 2010.
*Follow her on Twitter and Instagram.