Josephine Skriver is a Danish model, best known for her work with Victoria’s Secret. She has been a Victoria’s Secret lingerie model since 2013 and became a Victoria’s Secret Angel in February 2016. She has modelled for many fashion houses and brands such as H&M, Dior, Gucci, Bulgari, DKNY, Michael Kors, Balmain, MAC Cosmetics, Armani Exchange, Karen Millen, Max Mara, Topten, Tommy Hilfiger, Yves Saint Laurent Beauty, Caleres, Tom Ford, Shu Uemura, Andrew Marc, and G-Shock. She has also walked for designers such as Calvin Klein, Yves Saint Laurent, Valentino, Alexander McQueen, Rag & Bone, Gucci, Dolce & Gabbana, Givenchy, Balenciaga, DKNY and Christian Dior. She has appeared on the cover or been featured in many international fashion magazines including Marie Claire, Vanity Fair, V magazine, Interview, L’Officiel, Vs., W, Allure, Vogue, Elle, and Harper’s Bazaar. Born Josephine Skriver Karlsen on April 14, 1993 in Copenhagen, Denmark, she was raised by a lesbian mother and a gay father. She has a younger brother named Oliver. Skriver was discovered at the age of 15, when she and her soccer team visited New York. She has been in a relationship with American musician Alexander DeLeon since 2013. They got engaged in Finland in November 2018. 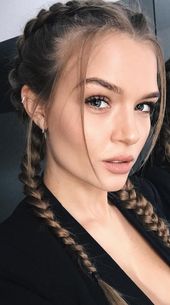 Josephine Skriver Facts:
*She was born on April 14, 1993 in Copenhagen, Denmark.
*Her father is a marine biologist and her mother is an IT analyst.
*She was a prolific soccer player while in school.
*She aspires to become a doctor.
*She became an official Victoria’s Secret Angel on February 19, 2016.
*She is an avid fan of the NHL’s Nashville Predators and the NFL’s Las Vegas Raiders.
*Follow her on Twitter, Facebook and Instagram.