Maria Menounos is an American actress, journalist, TV hostess, and occasional professional wrestling personality, best known for her appearances as a TV correspondent for Today, Access Hollywood, and Extra. Maria was born Maria Constaninos Menounos on June 8, 1978 in Medford, Massachusetts to Greek parents Costas and Litsa Menounos. She has a younger brother, Peter. She is engaged to her long-term boyfriend Keven Undergaro since 2016, they began dating in 1998. 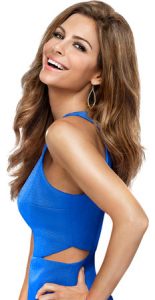 Maria Menounos Facts:
*She is of Greek descent and speaks Greek, English, and Spanish fluently.
*She interviewed the former President George W. Bush in her work for Channel One News.
*She was ranked #70 on Maxim magazine’s Hot 100 list of 2009.
*FHMOnline named her one of the top Sexiest 100 Women in the World in 2003 & 2009.
*She worked as an international correspondent for Channel One News.
*In 2004, she appeared in FHM magazine, People magazine.
*She placed second in the Miss Massachusetts USA 2000.
*Follow Maria on Twitter, Facebook and Instagram.