American actress Viola Davis is the only African-American actress to have received three acting Oscar nominations. She won Tony Awards for her roles in August Wilson’s King Hedley II (2001) and Fences (2010). Davis was born on August 11, 1965 in Saint Matthews, South Carolina, U.S. to Dan Davis and Mary Alice Davis. Grew up in Central Falls, Rhode Island. Her family moved there when she was 2-months old. She has been married to actor Julius Tennon since June 2003. They adopted a daughter in 2011. 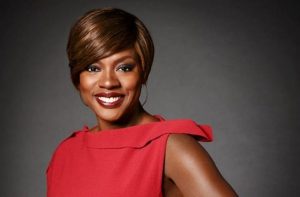 Viola Davis Education:
*She attended Central Falls High School.
*She subsequently attended the prestigious Juilliard School in New York City (1993).
*She graduated from Rhode Island College with a major in Theatres in 1988.

Viola Davis Facts:
*Her roles in ‘Doubt’ and ‘The Help’ earned her both Academy Award and Golden Globe nominations.
*Time magazine named her one of the 100 Most Influential People in the World in 2012.
*She was listed by the ‘Glamour magazine’ in 2012 Film Actress of the Year.
*Good friends with Octavia Spencer Meryl Streep, and Denzel Washington.
*Follow Davis on Twitter, Facebook and Instagram.