Mariana Ximenes is a Brazilian actress of theatre, film and television. She is known for her performances in such telenovelas as Uga-Uga, Cobras & Lagartos, A Favorita, and Passione. Her notable film appearances include: Caminho dos Sonhos, O Gorila, Rio Belongs to Us, Hotel Atlantico, and Bela Noite Para Voar. Throughout her career, Ximenes has won multiple awards in various categories including Best Actress, Favorite Actress, and Best Supporting Actress. Born Mariana Ximenes do Prado Nuzzi on April 26, 1981 in São Paulo, State of São Paulo, Brazil, to parents Fátima and José Nuzzi Neto, she has a younger brother named Rafael. She was raised in Vila Mariana, a neighborhood in São Paulo. She studied from 3rd grade till her 3rd year of high school at Colégio Marista Arquidiocesano. She had the desire of becoming an actress since her childhood and she appeared in a school play as Cinderella at age 6. She had her breakthrough in 2000 while portraying Bionda in the telenovela Uga Uga. Between 2001 and 2009, she was partner with film producer Pedro Buarque de Hollanda. They lived together in Ipanema, Rio de Janeiro. 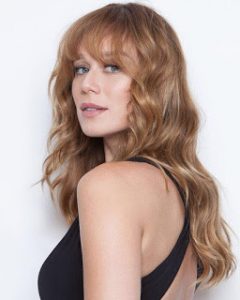 Mariana Ximenes Facts:
*She was born on April 26, 1981 in São Paulo, State of São Paulo, Brazil.
*Her parents separated when she was seventeen years old.
*She speaks German fluently.
*Her favorite sports include football, basketball, and capoeira (a Brazilian martial art).
*Follow her on Twitter, Facebook and Instagram.