Drew Barrymore is an American actress, model, director, producer and author. She is best known for her roles in the films Poison Ivy, Boys on the Side, Mad Love, Scream, Ever After and The Wedding Singer. Her other film roles include Never Been Kissed, Charlie’s Angels, Donnie Darko, 50 First Dates, Riding in Cars with Boys, Confessions of a Dangerous Mind, Blended, Fever Pitch, Music and Lyrics, Going the Distance, Big Miracle and Miss You Already. In 2010, she received a SAG Award and a Golden Globe for her performance as Edith Bouvier Beale in the 2009 HBO movie Grey Gardens. She made her directorial debut with Whip It (2009). She currently stars in the Netflix series Santa Clarita Diet. Born Drew Blyth Barrymore on February 22, 1975 in Culver City, California, to actors John Drew Barrymore and Jaid Barrymore, her parents divorced when she was just nine years old. Barrymore began acting when she was eleven months old. She made her film debut in 1980 with a small role in Altered States. Her breakout role was in 1982 as Gertie in E.T. the Extra-Terrestrial. She has been married three times and is the parent of two daughters, Olive and Frankie. She started dating David Hutchinson in 2017. 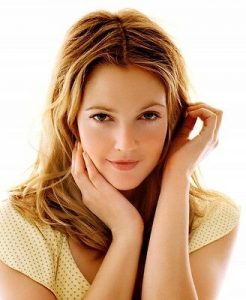 Drew Barrymore Facts:
*She was born on February 22, 1975 in Culver City, California, USA.
*Her parents divorced when she was age nine.
*People Magazine named her one of the top 50 Most Beautiful People in the World in 1997.
*She was ranked #5 in VH1’s list of the “100 Greatest Kid Stars”.
*Her godmothers are Anna Strasberg and Sophia Loren.
*She is allergic to garlic, bee stings, coffee and perfume.
*She is best friends with Cameron Diaz.
*She is a fan of Grease 2 (1982).
*She has two daughters, Olive and Frankie with her third husband, Will Kopelman.
*Visit her official website: www.drewbarrymore.com
*Follow her on Twitter, Facebook and Instagram.