Maribel Guardia is a Costa Rican-Mexican actress, model, singer and TV hostess who was crowned Miss Costa Rica 1978. She represented her country at the Miss Universe 1978 beauty pageant and the Miss World 1978 beauty pageant. One of the most advertised and surrounded woman by the Mexican Media, Guardia has appeared in such telenovelas as Muchacha italiana viene a casarse, Corona de lágrimas, Una familia con suerte, Al diablo con los guapos, Serafin, Misión S.O.S. aventura y amor, and Tú y yo. She co-starred with Andrés García in the 1984 Mexican film Pedro Navaja. Her first album as a singer was lauched in June 1988. 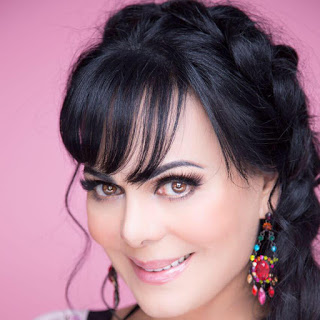 Born Maribel Del Rocío Fernández García on May 29, 1959 in San José, Costa Rica, Guardia got a scholarship from Televisa in order to study drama at Sergio Bustamante’s Academy. She had a son named Julián Figueroa with her former partner, Joan Sebastian. She married Marco Chacon in 2010.

Maribel Guardia Facts:
*She was born on May 29, 1959 in San José, Costa Rica.
*She was crowned Miss Costa Rica in 1978 and was a contestant in Miss Universe 1978.
*She had a four-year relationship with Joan Sebastian, and had a son with him.
*She has been inducted into the Paseo de las Luminarias in Mexico City.
*Follow her on Twitter, Facebook and Instagram.