Mariel Hemingway is an American actress and author. She is best known for her roles as Kathy McCormick in the 1976 rape and revenge thriller film Lipstick, and Tracy in the 1979 romantic comedy film Manhattan. Hemingway was nominated for an Academy Award for Best Supporting Actress for her performance in Manhattan. Her other notable performances include: Personal Best, Star 80, and Civil Wars. Born Mariel Hadley Hemingway on November 22, 1961 in Mill Valley, California, USA, to Byra Louise Whittlesey and Jack Hemingway, she was raised in Ketchum, Idaho; Los Angeles, Calif.; and New York City. She is the granddaughter of writer Ernest Hemingway. Her first role was with her sister Margaux in the 1976 movie Lipstick, for which she was nominated as “Best Newcomer” for the Golden Globes Award. She married Stephen Crisman in 1984, and the couple had two daughters named Langley and Dree before getting divorced in 2009. 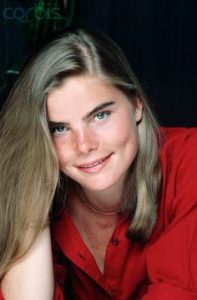 Mariel Hemingway Facts:
*She was born on November 22, 1961 in Mill Valley, California, USA.
*She began acting at age 14 in a breakout role in Lipstick.
*She played a bisexual track and field athlete in Personal Best.
*Her sister, Margaux, who was an actress and model, died of a barbiturate overdose at age 42 in 1996.
*She released a memoir, Finding My Balance, in 2002, and another, Out Came the Sun, in 2015.
*Visit her official website: www.marielhemingway.com
*Follow her on Twitter and Instagram.