Scotty McCreery is an American country music singer who rose to fame after winning the tenth season of American Idol in 2011. His debut studio album, Clear as Day, debuted at #1 on the Billboard Top 200 and was certified platinum in the United States. He is known for the hit singles “Five More Minutes,” “I Love You This Big,” “This is It,” and “See You Tonight.” Born Scott Cooke McCreery on October 9, 1993 in Garner, North Carolina, USA, to Judy and Michael McCreery, he has an older sister named Ashley. McCreery attended Timber Drive Elementary School in Garner, West Lake Middle School in Apex, and Garner Magnet High School. He won a singing contest called “Clayton Idol” in 2009. He married his long-time girlfriend Gabi Dugal in June 2018. 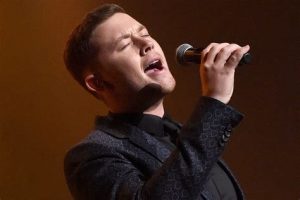 Scotty McCreery Facts:
*He was born on October 9, 1993 in Garner, North Carolina, USA.
*His father was born in Puerto Rico to an American father and a Puerto Rican mother.
*He was a pitcher on his high-school baseball team.
*He plays piano and guitar.
*He is the only American Idol winner to have Hispanic ancestry.
*He published his autobiography, Go Big or Go Home: The Journey Toward the Dream in May 2016, in which he touched upon his rise to fame.
*Visit his official website: www.scottymccreery.com
*Follow him on Twitter, Facebook and Instagram.