Actress Marisa Tomei was born on December 4, 1964 in Brooklyn, New York, the daughter of Patricia Addie Tomei and Gary A. Tomei. She has a younger brother, actor Adam Tomei. She belongs to Italian descent. In a career spanning three decades, Tomei had initial success in films as a young actress, followed by a series of unsuccessful films, then a resurgence with a series of critically acclaimed films. She won an Academy Award for her role as Mona Lisa Vito in My Cousin Vinny (1992). She also received two additional Academy Award nominations for In the Bedroom (2001) and The Wrestler (2008). Her other notable film appearances include: What Women Want, Anger Management, Wild Hogs,The Ides of March, The Big Short, and Parental Guidance. She also portrayed May Parker in the Marvel Cinematic Universe, including Spider-Man: Homecoming and Spider-Man: Far From Home. She has a perfect body which measures breast 34, waist 25 and hip 35. She has a height of 5 feet and 4½ inches which is around 164 cm. 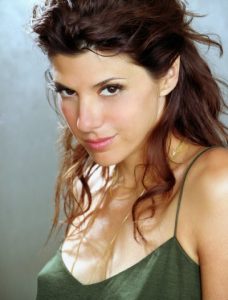 Marisa Tomei Facts:
*She is of Italian descent.
*Older sister of actor Adam Tomei.
*She has a tattoo of the Egyptian Eye of Ra on her right foot.
*She has dual citizenship of Italian and American.
*One of People Magazine’s Most Beautiful People 2009.
*She was born on the same day as Chelsea Noble.
*Follow her on Twitter, Facebook and Instagram.