Marjorie de Sousa is a Venezuelan actress and model born in Caracas. She is best known for her roles in Gata Salvaje as Camelia Valente, Amores Verdaderos as Kendra Ferreti, Mariana de la Noche as Carol, and Hasta el fin del mundo as Sofía Ripoll / Sofía Fernández. She is also known for playing the role of Cristina Velez Valderrama in Sueño de amor in 2016. She participated in Miss Venezuela 1999 beauty contest. She has also appeared for several advertisements under leading brands including, Pepsi-Cola and Formula 1. Born Marjorie Lissette De Sousa De Álamo in Caracas, Venezuela, on April 23, 1980, she is the daughter of Gloria Rivas and Juan de Sousa. She has two brothers, Hadda Boberto and Juan Carlos. In 2016, she became engaged to Sueño de amor costar Julian Gil with whom she has a son, Matias Gregorio Gil De Sousa born in 2017. She was previously married to Ricardo Alamo. 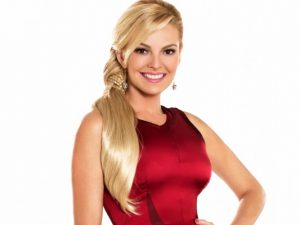 Marjorie de Sousa Facts:
*She belongs to Portuguese descent.
*She began modeling when she was 12.
*She started her career as a telenovela actress.
*She had her debut in 2000 on the telenovela Amantes de luna llena.
*Her favorite book is “God on a Harley” by Joan Brady
*Richard Gere and Julia Roberts are her favorite actors.
*Visit her official website: www.marjoriedesousa.tv
*Follow her on Twitter, Facebook and Instagram.