Marloes Horst is a Dutch fashion model. She has modeled for campaigns including Adidas, Calvin Klein, Diesel, H&M, Levi’s, Ralph Lauren, Emporio Armani, Nine West, and Victoria’s Secret Pink. She has appeared on several magazine covers including Italian D, Italian Flair, French Elle, Italian Grazia, Velvet, Ponytail, French Revue de Modes and Australian Vogue. She appeared in the Pirelli calendar in 2010 photographed by Terry Richardson. Born on March 8, 1989 in Akkrum, Friesland, Netherlands, she has an older brother. She started her modeling career with IMG Models and switched to Next Management in 2009. She made her debut walking for Prada and appearing in a fragrance campaign for Valentino. She was in a relationship with British actor and model, Alex Pettyfer from 2014 to 2016. 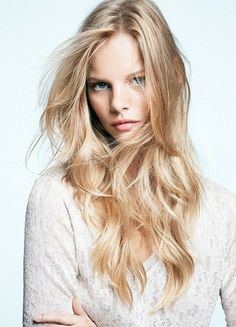 Marloes Horst Facts:
*She was born on March 8, 1989 in Akkrum, Friesland, Netherlands.
*She started her career in 2007.
*She signed with IMG Paris in 2007
*She appeared in the 2010 Pirelli Calendar.
*She became a spokesmodel for Maybelline.
*She enjoys dancing and surfing.
*She is friends with models Lisanne de Jong, Nicola Haffmans, Allegra Carpenter, Georgie Badiel, Rachel Rutt, and Vanessa Milde.
*Follow her on Twitter, Facebook and Instagram.