Martha Stewart is an American entrepreneur, author, and television personality. She is best known for the Martha Stewart Living TV show and magazine. She began hosting Martha & Snoop’s Potluck Dinner Party with Snoop Dogg in 2016. She was inducted into the New Jersey Hall of Fame in 2011. Born Martha Helen Kostyra on August 3, 1941 in Jersey City, New Jersey, to Martha Ruszkowski Kostyra and Edward Kostyra, she is of Polish descent and has five siblings. Her family moved to Nutley when Stewart was three years old. She was educated at Nutley High School and Barnard College. She married Andrew Stewart in 1995, and the couple had a daughter named Alexis in 1965 before getting divorced in 1990. 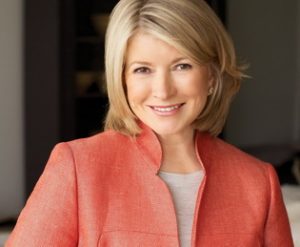 Martha Stewart Facts:
*She was born on August 3, 1941 in Jersey City, New Jersey.
*She graduated from Barnard College with a degree in History and Architectural History.
*She is the founder of Martha Stewart Living Omnimedia.
*People Magazine named her one of the top 50 Most Beautiful People in the World in 1996.
*She used to work as a stockbroker.
*She worked as a model to pay her college tuition.
*She served five months in a West Virginia prison.
*She is friends with Paul Newman, Rosie O’Donnell, Glenn Close, Snoop Dogg, and Mark Burnett.
*Visit her official website: www.marthastewart.com
*Follow her on Twitter, Facebook and Instagram.