Martin Lawrence is an American stand-up comedian, actor, producer, and writer. He is best known for his work on the TV series “Martin.” His notable film credits include, House Party, Boomerang, Nothing to Lose, Blue Streak, Life, Bad Boys, Wild Hogs, Big Momma’s House, and A Thin Line Between Love & Hate. He received the NAACP Image Award for his work on the TV series Martin. Born Martin Fitzgerald Lawrence on April 16, 1965 in Frankfurt am Main, Hessen, to Chlora and John Lawrence, his father served in the U.S. military and left the family when Martin was 8 years old. He attended and graduated from Eleanor Roosevelt High School. He was married to former Miss Virginia Patricia Southall from 1995 to 1996 and Shamicka Gibbs from 2010 to 2012. He has three daughters: Amara, Jasmine and Iyanna. 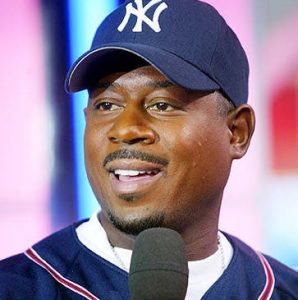 Books: You So Crazy

Martin Lawrence Facts:
*He is the second youngest of 6 children.
*He was named after civil rights leader Martin Luther King Jr. and U.S. President John F. Kennedy.
*He used to work an array of jobs to help support his family in his youth.
*He was banned from Saturday Night Live for life when he made crass jokes about women’s hygiene In 1994.
*He is friends with Robin Harris, Della Reese, Thomas Mikal Ford, and Steve Harvey.
*Follow him on Twitter, Facebook and Instagram.