Farrah Fawcett was an American actress and model, best remembered by the public for her role as Jill Monroe on the TV series Charlie’s Angels (1976). A poster of her in a red bathing suit catapulted her to sex-symbol stardom and which became the best selling pin-up poster in history. For her work in the 1984 film The Burning Bed, she was nominated for an Emmy Award. Born Farrah Leni Fawcett in Corpus Christi, Texas, on February 2, 1947, to Pauline and Jim Fawcett, she was a natural athlete. She attended the University of Texas at Austin form 1965 until 1968. She had a son named Redmond O’Neal, with Ryan O’Neal in 1985. 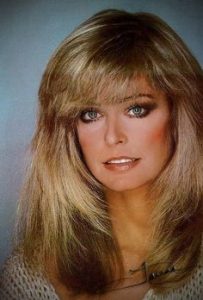 Farrah Fawcett Facts:
*She was the second daughter of Pauline and Jim Fawcett.
*She was voted TV Guide’s 26th Greatest TV Star of All Time.
*She and her husband Lee Majors formed Fawcett-Majors Productions in the late 1970s.
*She was named as one of 12 “Promising New Actors of 1976” in John Willis’ Screen World, Vol. 28.
*She was neighbors with Aaron Spelling and Tori Spelling for ten years.
*She was friends with Alana Stewart.
*She died on the same day as Michael Jackson.