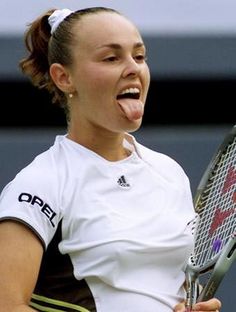 Martina Hingis Facts:
*She was born on September 30, 1980 in Kosice, Czechoslovakia, to Karol Hingis and Melanie Molitorová, both of whom were tennis players.
*She was named after Martina Navratilova.
*She began playing tennis at age 2.
*She won a Grand Slam junior title at age 12.
*She turned professional in 1994.
*She made her WTA debut at the Zurich Open in October 1994.
*She spent a total of 209 weeks as World No. 1.
*One of the greatest tennis players of all time.
*She has won five Grand Slam singles titles, three at the Australian Open (1997 to 1999), one at the U.S. Open (1997) and one at Wimbledon (1997).
*She won the 2015 Wimbledon doubles title together with Sania Mirza.
*She won two Australian Open Doubles titles with Anna Kournikova.
*She was ranked by Tennis magazine in 2005 as the 8th-greatest female player of the preceding 40 years.
*She was named one of the “30 Legends of Women’s Tennis: Past, Present and Future” by TIME in June 2011.
*She speaks Swiss German, Standard German, Czech, English and French fluently.
*Since July 2018, she has been married to Harald Leemann with whom she has a daughter, Lia.
*She was previously married to Thibault Hutin.
*Follow her on Twitter, Facebook and Instagram.