Mary Beth Evans is an American actress. She is best known for her portrayal of Kayla Brady on the NBC daytime soap Days of Our Lives, and for her role as Sierra Estaban on the CBS daytime soap As the World Turns. Other notable television roles include Dakota ‘Koty’ Lane in Rituals, Katherine Bell in General Hospital, Sara Garrett in The Bay, Catherine Hendrie in Chasing Life, and Karen in This Just In. Evans has also appeared as a guest-star in several television series such as Madame’s Place, Father Murphy, Knight Rider, Masquerade, Remington Steele, Riptide, Murder, She Wrote, Law & Order: Special Victims Unit, Monk, Criminal Minds, and Body of Proof. 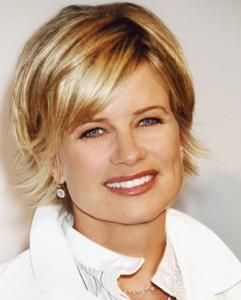 Born on March 7, 1961 in Pasadena, California, Evans grew up in Orange County, California. She has one older brother and two older sisters. She graduated from Huntington Beach High School. She married Dr. Michael Schwartz in November 1985. They have three children: Danny, Katie and Matthew.

Mary Beth Evans Facts:
*She was born on March 7, 1961 in Pasadena, California, USA.
*She is the youngest of four children.
*At age 14, Evans got a job in a fast-food restaurant and had her older sister drive her to acting classes.
*Mainly known for playing the role of Kayla Brady on the NBC soap opera Days of Our Lives from 1986 to 1992, 2006 to 2009, and 2010 to present.
*She launched her own lifestyle blog, Plank, in January 2015.
*She is also a fantastic cook, an avid gardener and enjoys interior decorating.
*Visit her blog: www.plankblog.com
*Follow her on Twitter and Instagram.