Maryam Nawaz is a Pakistani politician, activist and the daughter of former Prime Minister of Pakistan Nawaz Sharif and his wife Kalsoom Nawaz Sharif. She was born on October 28, 1973 as Maryam Nawaz Sharif in Lahore, Punjab, Pakistan. She has been married to Muhammad Safdar Awan since 1992. They have three children. 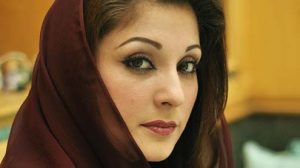 Maryam Nawaz Education:
Convent of Jesus and Mary, Lahore,
University of Cambridge
University of the Punjab
She earned a master’s degree from Punjab University.

Maryam Nawaz Facts:
*She began her political career in 2012.
*She is fluent in four languages.
*She is seen as the political heir to her father.
*Follow her on Twitter.