Megan Fox is an American actress and model. She rose to prominence by portraying the role of Mikaela Banes in the 2007 science fiction film Transformers, for which she won a National Movie Award for Best Performance by a Female in 2007. She reprised her role in the 2009 sequel, Transformers: Revenge of the Fallen. Fox’s other notable works include Jennifer’s Body, Teenage Mutant Ninja Turtles, Teenage Mutant Ninja Turtles: Out of the Shadows, Ocean Ave., Hope & Faith, and New Girl. She’s considered a sex symbols and has appeared in magazines such as Maxim, FHM, and Rolling Stone. Fox is the recipient of various accolades, including four Teen Choice Awards and two Scream Awards. Born Megan Denise Fox on May 16, 1986 in Oak Ridge, Tennessee, to Gloria Darlene and Franklin Thomas Fox, her parents divorced when she was age three, and Fox and her sister were raised by her mother and her stepfather, Tony Tonachio. She began taking singing and dancing lessons at the age of five and began modeling at age 13. She dropped out of high school and moved to LA. She made her film debut in 2004 with a role in the teen comedy Confessions of a Teenage Drama Queen. On June 24, 2010, she married her boyfriend of 6 years Brian Austin Green following a 3-year-long engagement. They have three sons: Noah, Bodhi, and Journey. 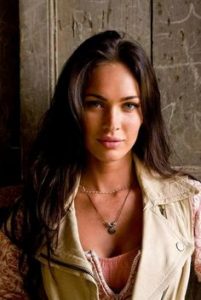 Megan Fox Facts:
*She was born on May 16, 1986 in Oak Ridge, Tennessee, USA.
*She belongs to English, Irish, French and Native American descent.
*She began modeling when she was thirteen years old.
*She lost her two toenails during the shooting of ‘Transformers’.
*She was ranked #1 in the 2008 FHM list of “100 Sexiest Women in the World”.
*She is a huge fan of both the Star Trek and Star Wars franchises.
*She is friends with Jennifer Blanc-Biehn, Shia LaBeouf, Amanda Seyfried and Michael Biehn.
*She began dating actor Brian Austin Green in 2004 when she was 18 and Brian was 30.
*She has nine tattoos on her body.
*Follow her on Twitter, Facebook and Instagram.