Megan Hilty is an American actress and singer born in Bellevue, Washington. She is best known for her portrayal of Glinda the Good Witch in the Broadway Musical Wicked. She played Ivy Lynn on the musical-drama TV series Smash, on which she sang many original songs, including the Grammy Award-nominated “Let Me Be Your Star”. She is also known for her performances in 9 to 5: The Musical, Noises Off, and Sean Saves the World. Hilty was born to Donna and Jack Hilty, in Bellevue, Washington, USA as Megan Kathleen Hilty. She married Brian Gallagher in 2013. They have two children: daughter, Viola, and son, Ronan. 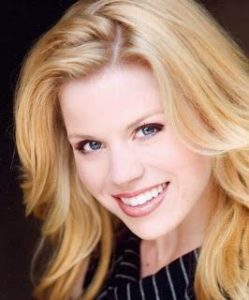 Megan Hilty Education:
She attended Sammamish High School and Washington Academy of Performing Arts Conservatory High School, and the Chrysalis School, Woodinville.
She earned her bachelor’s degree in Theater from Carnegie Mellon School of Drama in 2004.

Albums: It Happens All the Time, A Merry Little Christmas, Live at the Cafe Carlyle

“People think that theater actors are too big for the camera. It’s like, ‘No, we’re actors and we adjust for our audience.” – Megan Hilty