Lena Headey is a British film and television actress who rose to prominence by portraying the role of Cersei Lannister on the HBO hit series “Game of Thrones”. She is also known for her roles in Dredd and Terminator: The Sarah Connor Chronicles. Her film roles include 300, The Purge, and Pride and Prejudice and Zombies. She had her film debut in the 1992 mystery drama Waterland. Lena was born in Hamilton, Bermuda, to British parents Sue and John Headey. She has one younger brother, Tim. She married Peter Loughran in 1995, and the couple had a son named Wylie Elliot in 2010 before getting divorced in 2013. She has been in a relationship with director Dan Cadan since 2015, with whom she has one daughter, Teddy. 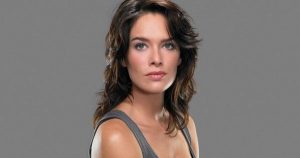 Lena Headey Education:
She enrolled at Shelley College in West Yorkshire in England where she studied acting.

Lena Headey Facts:
*She moved to Huddersfield, Yorkshire with her family, when she was five.
*She has Tattoos: on her arm saying “Jason” in Thai; right upper arm; between shoulder blades; extensive tattoos on her back.
*She was diagnosed with clinical depression when she was 15.
*She is a vegetarian and supports PETA.
*She was placed number 64 on the Maxim magazine Hot 100 of 2007 list.
*She practices boxing and yoga in her free time in order to stay fit.
*She is friends with actress Piper Perabo.
*She has two dogs, named Angela Lansbury and Wizard.
*Follow her on Twitter and Instagram.

“I’ve got quite a big gay following. I played a lesbian prostitute in the TV series ‘Band Of Gold’ but I think my following really grew when I played one in the film ‘Imagine Me & You,’ with Piper Perabo.” – Lena Headey