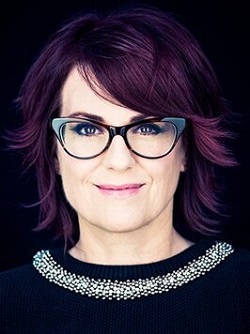 Megan Mullally is an American actress, comedian, and singer. She is best known for her portrayal of Karen Walker on the NBC sitcom Will & Grace, for which she received eight Primetime Emmy Award nominations for Outstanding Supporting Actress in a Comedy Series, winning twice in 2000 and 2006. She has also appeared in the films Last Resort, Everything Put Together, Stealing Harvard, Smashed, Apartment Troubles, The Kings of Summer and G.B.F. Mullally hosted the talk show The Megan Mullally Show from 2006 to 2007.

Born on November 12, 1958 in Los Angeles, California, her father, Carter Mullally Jr., was a contract player for Paramount, and her mother, Martha, was a model. Megan studied ballet from the age of six and was a soloist with Oklahoma City’s Ballet Oklahoma. She graduated from Casady High School, Oklahoma City, Oklahoma and attended Northwestern University in Evanston, Illinois, intending to study acting, but switched to English literature.

She has been married to Nick Offerman since 2003. She was previously married to Michael A. Katcher.

Books: The Greatest Love Story Ever Told: An Oral History

Megan Mullally Facts:
*She was born on November 12, 1958 in Los Angeles, California, USA.
*She is of English, Irish and Scandinavian descent.
*She studied ballet from the age of six and was a soloist with Oklahoma City’s Ballet Oklahoma.
*She also studied at George Balanchine’s School of American Ballet.
*She graduated from Casady High School, Oklahoma City, Oklahoma.
*She studied English Literature and Art History at Northwestern University in Evanston, Illinois, and subsequently became active in Chicago theatre.
*Her acting mentors were Elaine Stritch and Ellen Burstyn.
*She is close friends with actress Laura Innes.
*Visit her official website: www.meganmullally.net
*Follow her on Twitter and Instagram.