Meghan Trainor is an American singer and songwriter. She is best known for the hit songs “All About That Bass,” “Lips Are Movin” and “Like I’m Gonna Lose You”. Her debut single “All About That Bass” earned her a Billboard Music Award for Top Digital Song in 2015. She won her first Grammy, for best new artist, in 2016. She also wrote songs for top artists such as Sabrina Carpenter and Rascal Flatts. Born Meghan Elizabeth Trainor on December 22, 1993 in Nantucket, Massachusetts, USA, to Gary and Kelli Trainor, she has two brothers, Ryan Trainor and Justin Trainor. She belongs to Irish, Polish and French descent. In 2016, she began dating actor Daryl Sabara. They became engaged on December 22, 2017. 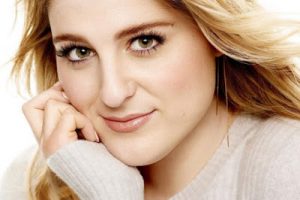 Meghan Trainor Facts:
*She was born December 22, 1993 in Nantucket, Massachusetts.
*She started singing at the age of six.
*She started writing songs when she was 11 years old.
*She wrote her first song with the help of Grammy-nominated producer Kevin Kadish.
*Her debut single “All About That Bass” reached #1 on US Billboard Hot 100 and remained on top for eight consecutive weeks.
*She was named Best Female Artist at the 2009 International Acoustic Music Awards.
*Frank Sinatra and Christina Aguilera are her musical influences.
*She is an animal lover.
*Visit her official website: www.meghan-trainor.com
*Follow her on Twitter, Facebook and Instagram.