Melania Trump is a former model and the third wife of President Donald J. Trump. She is the second First Lady born outside of the United States, and she is the only First Lady to become a naturalized U.S. citizen. Born Melanija Knavs on April 26, 1970 in Slovenia, to parents Amalija Ulčnik and Viktor Knavs, her father was a car dealer and her mother was a designer for children’s clothing. She has an older sister name Ines, and an elderly half-brother from her father’s previous relationship. She attended University of Ljubljana in Slovenia to study architecture, but dropped out after one year to pursue her modeling career. She began her modeling career at the age of 16, and two years later she signed on with an agency in Milan. She has worked with such photographers as Helmut Newton and Patrick Demarchelier, and appeared on the cover of fashion magazines such as Harper’s Bazaar (Bulgaria), Vanity Fair (Italy), GQ (for which she posed n*de in January 2000) and the Sports Illustrated Swimsuit Issue. She married Donald Trump in 2005. On March 20, 2006, she gave birth to their son, Barron William Trump. 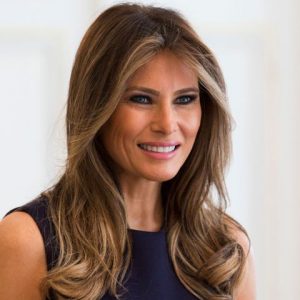 Melania Trump Facts:
*She was born on April 26, 1970 in Slovenia.
*She is the wife of President Donald J. Trump and the mother of Barron Trump.
*She is the second foreign-born First Lady of the United States, following Louisa Adams in 1825.
*She was discovered at age 17 by famous photographer Stane Jerko in a modeling competition held in Ljubljana.
*In 1996, she moved to New York and obtained U.S. citizenship in 2006.
*She was featured on the cover of GQ magazine in 2008.
*She met her future husband Donald Trump at a New York fashion party in 1998.
*Besides her native Slovene language, she also speaks Serbo-Croatian.
*She is the step-mother of Donald Jr., Eric, Ivanka and Tiffany Trump.
*Her parents, Amalija and Viktor Knavs, became U.S. citizens in August 2018.
*Follow her on Twitter, Facebook and Instagram.