Melinda Saxe is an American magician. She is best known for her television performances and Las Vegas stage shows in which she was billed as “The First Lady of Magic”. Born on March 6, 1965 in Tennessee, to parents Bonnie and Richard Saxe, she is the older sister of David Saxe. At age 3, she moved to Las Vegas, after her mother landed a spot as a showgirl in the Folies Bergere show at the Tropicana. Saxe attended and graduated from Bonanza High School in Las Vegas as a junior in 1982. At the age of 16, Saxe became interested in magic, and would practice it all day long from that point on. She married Lance Burton in 1993 and the couple divorced the following year. [© celebsfacts.com] In June 2000, Saxe married Mark Evensvold with whom she has two children. 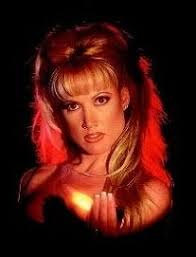 Melinda Saxe Facts:
*She was born on March 6, 1965 in Tennessee, USA.
*Her mother was a dancer in the world-famous Folies Bergère and her father was a saxophone player and bandleader for The Rat Pack.
*Her two siblings, Suzanne and David, both became stage performers.
*She joined Siegfried & Roy’s magic show as a dancer at the age of 17.
*She is often associated with the “Drill of Death” illusion, which was a signature trick developed for her by André Kole.
*In 1998 the International Magicians Society named her “Magician of the Year” in its “Merlin” awards.