Melissa Gilbert is an American actress, best known for playing the role of Laura Ingalls on the television series Little House on the Prairie. She has also done voice work in Batman: The Animated Series. Born Melissa Ellen Gilbert on May 8, 1964 in Los Angeles, California, to Kathy Wood and David Darlington, she is the adopted daughter of actor and comedian Paul Gilbert and his wife, Barbara Crane. She began her acting career appearing on commercials for Alpo dog food and other products. She married Timothy Busfield on April 24, 2013. She was previously married to Bruce Boxleitner and Bo Brinkman. She was in a highly publicized relationship with Rob Lowe during the 1980s. 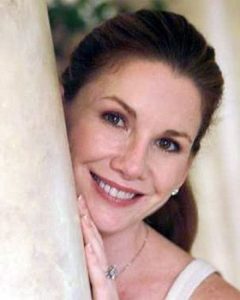 Melissa Gilbert Facts:
*She is adopted half-sister of Sara Gilbert.
*Her childhood idol was Shirley Temple.
*She received a star on the Hollywood Walk of Fame at 6429 Hollywood Blvd.
*She was highly influenced by Michael Landon.
*Visit her official website: www.melissa-gilbert.com
*Follow her on Twitter and Facebook.